I wondered if there would be summer nooner yoga classes this year. I saw a notice at the Robson street downtown Lululemon store saying that it would return soon!

I was so happy to see that! I found the schedule online.

This is what it said:

We’re all entitled to an extended lunch break, right?

change that “nama’stay in the office” to “namaste” in the plaza.

nooner yoga is back, and better than ever. Starting Thursday, July 9th, then running every Wednesday at Noon from July 15th – September 2nd, as well as a special finale on Labour Day Monday (September 7th) at the Olympic Cauldron at Jack Poole Plaza.

We get by with a little help from our friends, so stay tuned for pop-ups from Rise Kombucha, Lush Cosmetics, Saje, Eastwood Cycle Sanctuary, KIND Snacks, Stanley Park Brewery, Whistler Water and more!

We’ll see you at noon, yoga-na love it!’

I’ve been going to the free yoga classes offered by Lululemon at their stores for years and I love these summer classes.

I went to the class on August 12, 2015. Last week’s class was cancelled due to the rain but today was beautiful!

Here are some photos before the class when everybody is stretching and getting ready.

Here is a picture of the instructor, Danielle. She has been a previous nooner yoga instructor and also taught a Seawheeze sunset yoga session last year! She’s very popular!

Here are some photos of her assistants! Two of them are her daughters!

There were some other kids doing yoga in the class, too!

Here are some photos of the class. You can see the olympic flame cauldron in the back of some of the photos. 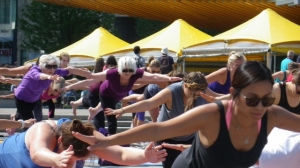 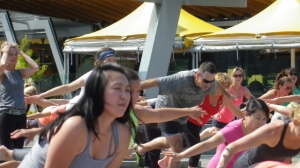 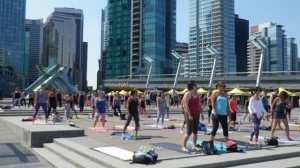 Our class was really shaking their groove thing! Everybody was so happy dancing away!

Again, we were lucky to get Whistler water! And thank you to Saje Natural Wellness for doing some yoga aromatherapy and giving us some yoga mist! I love their products!

This was really great! Thanks very much to Lululemon for offering this special summer nooner classes! There is an extra one this week because of the Lululemon Seawheeze Half Marathon this weekend. I’ll definitely return to take classes from those star yoga instructors!

‘Every Wednesday in July and August at 12PM (noon) take a break from the daily grind and join the rest of Vancouver for a midday flow near the Olympic Cauldron at Burrard Landing. Each week features a unique practice!

Please arrive ready to practice and early to ensure your spot.’

Don’t forget to bring your mat!

*Due to the out door venue each weekly event will be subject to weather.*

I described the first four summer nooner class in other posts the last month. Today’s class was with super yogi, Danielle Mika Nagel! I have never taken her class before.

She got us to start off with seven Oms…I’ve never done that many before but it felt great!

This red and blue combo has been quite popular at nooner yoga classes! 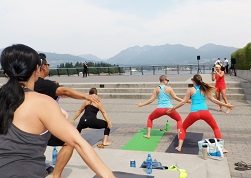 Starting off the class with lots of movement, light aerobic kind.

Side movements very fast and fluid. Being the klutz that I am, I kept getting mixed up.

She’s got the moves! Shimmy! 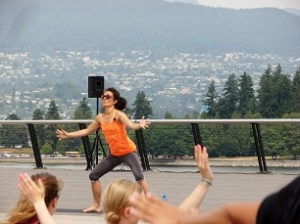 Pairing up with a partner or group.

Lots of pairing and group exercises today. Getting to know people.

Here’s a view toward the back, with the backdrop of the Olympic flame. 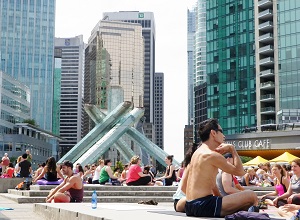 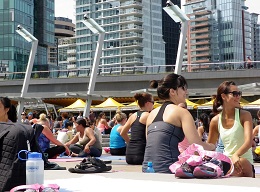 At first glance, it looks like being at a beach! Well, maybe not.

See the popular red that some Lululemon ambassadors are wearing?

Tourists saunter on by the yoga class.

Lying in the sun at lunchtime, what could be better? 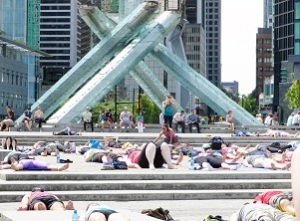 Lululemon staffer comes in front to remind us of the upcoming Seawheeze Half-Marathon next weekend! They will have yoga classes as part of the Seawheeze week! 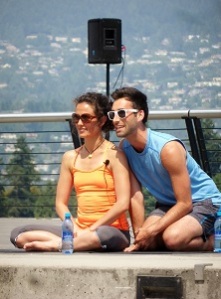 This lady on the right brought her mat but didn’t participate. She just watched the whole class, sitting on the side. Shy? 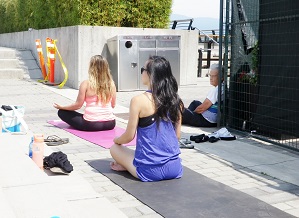 Almost the end of class…

Something was said to make people grab their phones!

Free water was given out by Whistler water again! Thanks for the water!

I’m so glad that I was able to make it to this class for the fifth time! I am really looking forward to taking the rest of the classes and hope I can make the next week! So grateful to Lululemon for offering these free classes!