‘Every Wednesday in July and August at 12PM (noon) take a break from the daily grind and join the rest of Vancouver for a midday flow near the Olympic Cauldron at Burrard Landing. Each week features a unique practice!

‘Nooner Yoga at the Cauldron on Jack Poole Plaza.

Please bring your own mat and arrive early to ensure your spot.’

I’ve been going to the free yoga classes offered by Lululemon at their stores for years and I love these summer classes.

I went to today’s class, August 20th, 2014. Last week was cancelled due to rain today’s class went on as scheduled. It’s overcast but not raining.

You can see the Olympic Flame Cauldron in the background. There were hundreds of yogis today, but probably not quite as many as there were two weeks ago.

Here are some views of today’s instructor, Sasha! This is her first year of nooner yoga! You can see the beautiful mountains behind her. 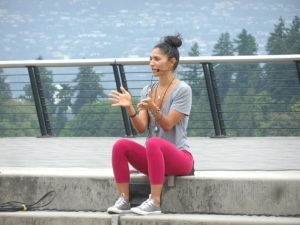 Here she is talking with the DJ. He played some really great tunes!

Here are some photos of the class.

Some more yoga. Helping your fellow yogi out! 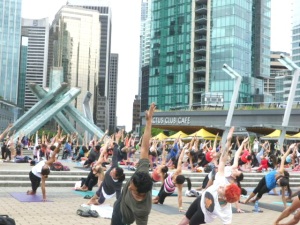 The instructor demonstrates some very bendy and twisty poses! 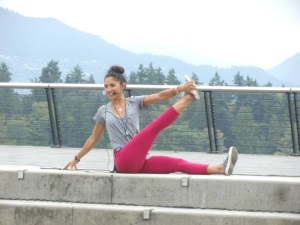 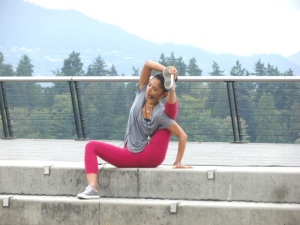 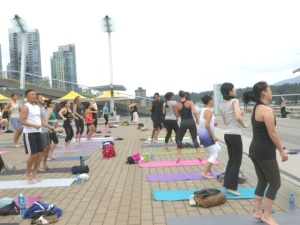 Here are my friends, doing a head stand.

They had Whistler bottled water for us again! This so great to have after a class!

This was really great! Thanks very much to Lululemon for offering this special summer nooner classes! I’ll definitely return to take classes from those star yoga instructors! There’s one free nooner yoga with Alex Mazerolle (who taught on July 30th) on Friday as part of the Lululemon Seawheeze Half-Marathon and then one more next week with Frankie Lavaggi.