This is a white t-shirt that says, I Love Hockey, across the front. It looks odd because of the angle I took the photo at. The neck is round. 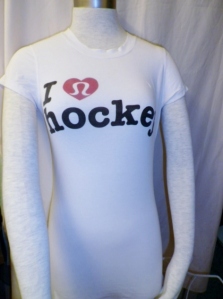 This is a close up of the front of the t-shirt. It has cap sleeves.

The red heart has a white omega lululemon symbol.

Here is the full back view. The t-shirt is fairly long and gives good coverage.

Here is a closer view of the top back of the t-shirt. There is a small silver omega lululemon symbol. The half circle section is a double layer.

I love these t-shirts because the fabric is so comfortable, well-fitting with lycra in it.

Did anybody wear one of the t-shirts during the winter olympics in 2010?

This is a red fleece hat made to look like a hockey helmet. This came out during the Vancouver winter olympics in 2010. During the gold medal mens hockey final, most Vancouverites were watching the game on TV. The West 4th Avenue Lululemon store in Kitsilano (the first Lululemon store) also had a huge TV showing the game (the game was being played downtown but tickets were astronomically expensive).

The staff was handing out these hockey helmet hats to passers by.  It also included a black crayon so you could black in a tooth as well so you’d look like a typical toothless hockey player.

As you can see, it has Canada embroidered across the front. There were also navy colored USA hockey helmet hats as well but no one dared to wear that at this time! (I got one for my American friend only after I promised it wouldn’t be worn until after the game was over). 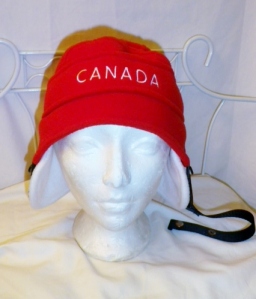 This is the side view of the hat. It shows the Canadian symbol of a maple leaf embroidered. There are also two holes. You can also see the black strap as well. 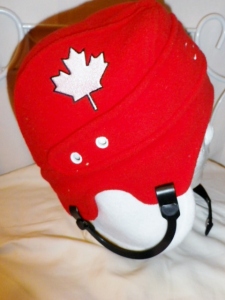 Here is the other side view, showing the embroidered Lululemon omega symbol. 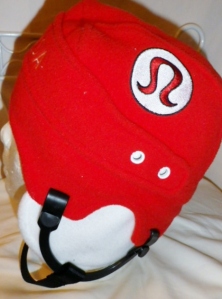 Here is the view from the top.

Here is a close up view of the black under the chin strap that you can snap closed. There are white fleece ear covers. 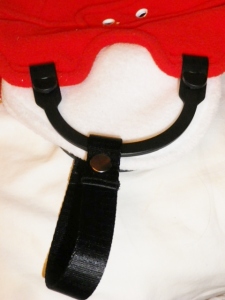 Here is the label inside the hat.

This is such a fun hat and a lot of people wore these while participating in the winter olympics festivities all over Vancouver.

(Team USA got their revenge and did win the gold medal for the mens paralympics hockey.)

This is a pair of dark green khaki olive drawstring shorts made of sweatshirt or sweatpants material. The legs are fairly short in length. 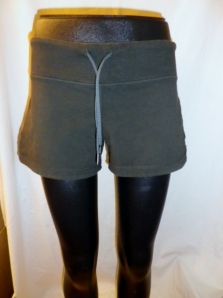 This is a close up of the front of the shorts. There is a drawstring waistband. The doubled over waistband is ribbed and approximately three inches wide.

At the end of the ties, it says Lululemon on them. 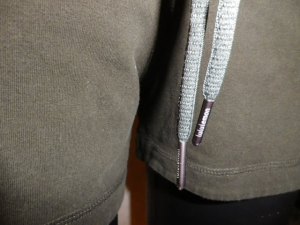 Here is a closeup view of the back. There is a triangle section that provides a better fit. 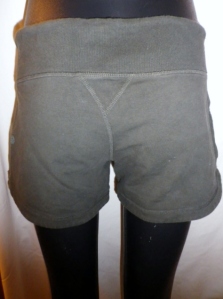 There is a small raised velour omega Lululemon symbol on the left hand side.

Here is a close-up of the side. They aren’t joined that well. 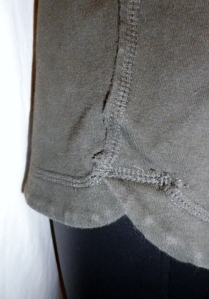 There is an inside mesh pocket. As I’ve mentioned before, these pockets are too small to hold much of anything in them in my opinion. 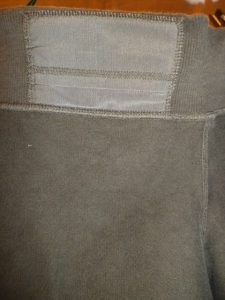 These shorts are very comfortable and could be used for anything, yoga, running, or just walking around. Does anybody know the name of these?

This is a pair of long light pink yoga pants or sweatpants with white trim. The fabric is a thicker cotton sweatpants type with some lycra.

Here is a close up of the front. You can see the white stripe decal trim. This pair is quite old and the decal has started to crack. You can see that the pink is a dusty rose type of color.

Here is a view of the lululemon omega symbol. The waistband measures approximately three inches wide.

There is a crotch insert as well.

Here is the full view of the back of the pants.

Here is a close up of the top of the back view.

Here is a view of the label. It says that it was Made in Vancouver, Canada. ‘Providing components for people to live a longer, healthier and more fun life.’ They are a size 2.

These pants are so comfortable! And the thicker fabric makes it nice for the colder weather. Does anybody know the name of these?

This is a pair of long black pants with a drawstring waistband and elastic cuffs. They are made of a thin light material.

Here is a close up view of the waistband. It has a nice elasticized satin lace with lululemon stamped on the end.

Here is a close up of the elasticized or elastic cuffs.

Here is a view of the lower legs. They are not straight, but slouchy or ruched? 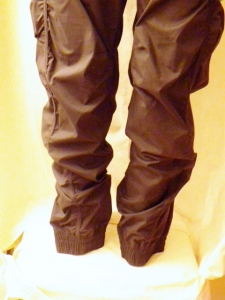 Here is a view of the side. 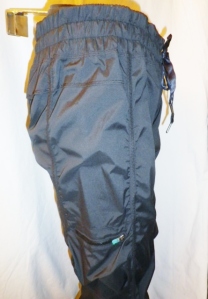 Here is a full view of the back. 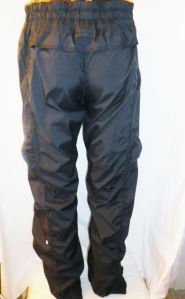 Here is a view of the top back. As you can see, there is a ruffle peplum sort of thing and a loop. I don’t know what people would use that loop for though. 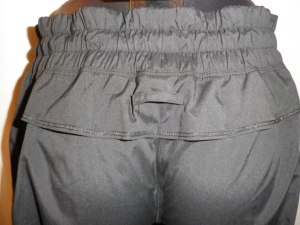 Here is the side view showing the small silver omega lululemon symbol. There are also two air holes as well. 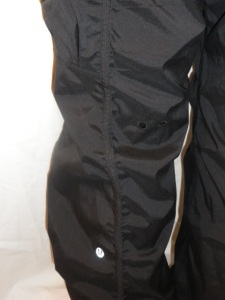 There are zippered pockets with a blue lululemon tab. There are two pockets, one on each side. They are lined with a mesh material.

There is a label inside that says that they are size 10, designed in Canada and made in China.

I thought that these might be studio pants but maybe not. Does anybody know the name of these pants?

This is a pair of light purple lilac heather running tights with light grey or white mesh inserts. 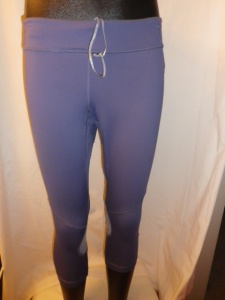 Here is a close up of the two-inch waistband with the drawstring. It is made of a satin like material.

Here is a view of the bottom front.  There are mesh inserts or air vents. The tights are mid calf length. They are a light grey or even white color.

Here is the full length back view.

Here is the back view of the top of the tights. 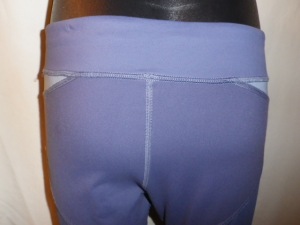 Here is the back view of the bottom legs. There is a closer view of the light grey mesh inserts, air vents. You can also see the small silver omega lululemon symbol on the left hand leg.

Here is a close up of the tag that I didn’t rip out. They are size 10.  It also says wet, dry, warm on the top of the inside of the waistband.

What was unusual is that it says, designed in Vancouver, made in Indonesia!

The body fabric is: 82% nylon and 18% lycra spandex. There are three other fabric blends on the label!

They are by far the most comfortable running tights! Does anybody know the name of them?

This is a Westbeach T-shirt or sweatshirt. Westbeach is one of Lululemon founder, Chip Wilson’s other companies that made clothing for people like snow boarders and skiers.

Here is a closer view of the front.

According to the Westbeach website, 1979 was when it was all started, when they started making surf apparel. In the 1980s, the moved to snowboarding apparel.

Here’s the label. It’s cool to see that Chip has had a hand in starting such diverse active sportswear companies!